"On the wings of the morning they gather and fly
In the hush of the night-time I hear them go by
The horses of memory thundering through
With flashing white fetlocks all wet with the dew.

A rider communicating with a horse at the highest level, such as in the arenas of Spain, is an incredible thing to witness. The fluidity and lightening fast movements, made inches from death, are riveting to behold. Those performances are remarkable when you consider that a signal goes from the rider’s brain, to his hands, seat, legs – – then to the horses barrel, mouth, neck – – then to his brain – – and then to his feet. Against the fighting bulls, it appears that the rider has but to think it and the horse has already responded and that is not far from what is happening…and has to happen if they are to survive.

In our own country, the fruit of this same Spanish way of training can be seen on remote ranches in the Great Basin and annually at the Californios gathering in Red Bluff, California. But there are pretenders to the throne. In the same way that a novice skier can pose in racing gear at the lift at Innsbruck, so can an owner put a spade bit into the mouth of a good horse and declare it a “Bridle Horse.” But it just doesn’t work that way because a true “Bridle Horse” that is”straight up in the bridle” is both a process and a result. There are no short cuts to the five years of effort and the proof is seen in his carriage, his performance and in his lightness (which has to be felt to be appreciated). The horse that is truly “straight up” works on signal not leverage so when it is time to go hard and fast and then to rein him off a cow, the pretender falls apart because he does not have the Spanish foundation and has not learned to work as Ray Ordway would say: “inside the hackamore”…….that is the horse has not learned “self carriage” and to work on “signal.”

It is poignant to me that one of the few Morgans that I KNOW to be straight up in the Bridle died at the same time that the article (in the Morgan Horse magazine) on Ray Ordway was being finalized and that this was a horse that Ray and LaVerne both thought of as an outstanding example of a bridle horse. He was living proof that the Morgan by his anatomy and disposition is a natural candidate for the process of bridling. I told my friend Ed Dabney about Joshua passing away and he responded: “tell Jo to remember the journey.” I don’t think I could say it any better. Our lives are richer because of horses and few of us will have the opportunity to go where Jo has been with Josh. Good for you Jo. Good for you Joshua.

I guess I do not know any easy way to break this awful news…..my beautiful, talented Morgan (ex) stallion and best buddy, Can Don Joshua Danny – is dead. He died sometime during the night of December 3. He was just 21. I cannot say for certain what it was, but it looks for all the world like a heart attack. However, he had been in excellent health as far as I’d known. I’d used him all summer, leading my pack string of Morgans – sometimes doing 30 miles a day. Even though as my main saddle horse he had to work harder than the pack horses because he was loaded both directions carrying me and my saddle ( whereas the pack horses were usually only loaded one way ), he never faltered, never slowed, and was out in front setting the pace for everyone else …. looking doggoned gorgeous, and happy to be doing it. After returning to Tivy Valley in October, I had been using him to help me get my two-year olds going, ponying them out on the trail and doing desensitization work from Josh’s back – work that requires a patient, super solid, and extremely desensitized horse all in itself. Josh was all of that, and more. Josh truly was the greatest horse I have known to date. He came to me very well trained in many ways, and with the best “go-to-town” manners I’d ever seen, or believed possible, in a mature breeding stallion – partly because I suspect that is just how he was, and partly thanks to the folks who bred, raised, and trained him, Victoria and Percy. I then, had the honor of taking him through the bridling process and into the full bridle. We worked cattle and did ranch work together, I worked colts from him, taught clinics from him, rode him in some incredibly horrific terrain in the high country, even packed him. There simply was nothing he couldn’t, or wouldn’t do. 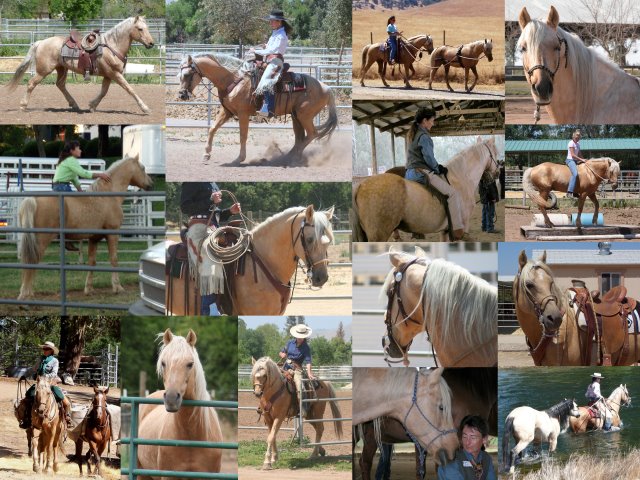 I know many horse owners have had the pleasure of owning a stallion of Josh’s quality, sensibility, and loving character – but he was the first for me. I will never, ever forget him – he was so much more to me than a horse. I would sit on the fence and he would come over and lay his head in my lap. He would follow me all over like a puppy. He was so doggoned people-friendly, was overflowing with personality, and visitors loved him. Even young children could ride him or do groundwork with him. I could count on him to do anything, anywhere, anytime. He was kind, honest, courageous almost beyond belief, powerful, and definitely a fashion statement with his spectacular dappled blond looks, huge expressive eyes, and tiny little tippy ears.

Thankfully he gave me many, many fabulous babies before I had to have him gelded just a few months ago as he had become infertile. It is possible that whatever caused the infertility may have played a part in his untimely death, but I elected not to have a necropsy done and instead he was buried on the property where he can overlook all his kids and all the mares in pasture and remember the great days.

I had ridden him most of the day Thursday, working 2-year olds and ponying them out, as I had every day all week. Josh was brilliant at this, because thanks to his innate courage the babies just knew that there was nothing to worry about no matter what I asked them to do, simply because HE never worried about whatever I asked them to do. I finished just about dark, fed everyone, and headed for the house thinking everything was fine. He was eating well when I left, acting perfectly normal. But when we fed the next morning – he was in the middle of his paddock, dead. There were no signs of trauma on him or in the paddock around him. It looks like he just laid down, fell asleep, and never woke up. One thing’s for sure – I sincerely hope that is how it was. The shock was almost overwhelming, and the pain of losing him has kind of kept me under the weather for a few days.

My challenge now is to keep going. I am fortunate to have one still-intact son of Josh’s, the phenomenal palomino JaF Sunrise Surfer Dude, who looks like he might make the bar that his daddy set. Time will tell on that. Surfer is 5 now and I have several foals by him due in the spring.

I know that in time, the pain and sadness I am feeling will diminish, and I will learn to get along without him. But wow – that was
a HORSE.

Any cookies that may not be particularly necessary for the website to function and is used specifically to collect user personal data via analytics, ads, other embedded contents are termed as non-necessary cookies. It is mandatory to procure user consent prior to running these cookies on your website.