Once the youngsters are weaned, and up to about eighteen months of age, I like to take a little time and expose them to some of the things they will encounter later on. I like to either pony them or “ground drive” them out on the trails up in the hills, at the walk, trot and canter. My working students are called upon and enjoy taking part in this phase of early learning. We’ll go through barrancas, take then through creeks and into the King’s River, building them up to where we can take then out along busy roadways.

I have learned there is great value in “sending” or “driving” colts over, around and through obstacles. I might use a halter rope for this, or I might ground drive them with lines. We set up little courses in the arena and practice different exercises including dragging noisy objects behind the colts. These objects might be a grain sack filled with crushed aluminum cans, or a yellow plastic slicker, or a “travois”. We use the colt’s natural curiosity and desire to see and touch new things, to help us create an atmosphere of learning without the colts even realizing they are being “taught”. Within just a few minutes though, I get very particular and ask that the colt become very exact. Pretty soon, the colts will go anywhere I send them. 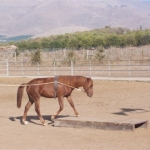 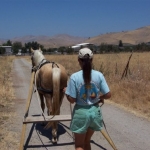 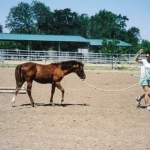 As yearlings, I like to let the colts wear a pony saddle for a few minutes a day, a few days in a row. They have already been prepared by doing rope work – we let them wear a rope around their belly, then their flank and under their tail. I work them at all three gaits while they are wearing this rope, until it feels like something they were born with. Then once they are saddled, I work them at all three gaits again. When I am satisfied they are absolutely comfortable with everything we’ve done so far, the colts go back out to pasture. 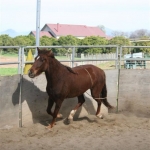 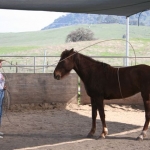 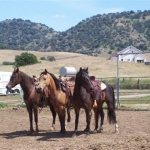 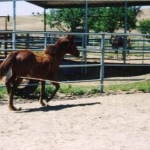 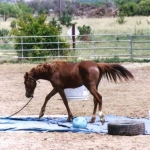 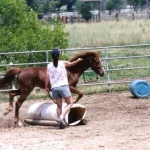 Around two years of age, the colts come back in from pasture to learn some different skills. I have discovered there is something wonderful about a horse being comfortable with wearing a pack saddle and carrying packs filled with noisy objects. As in each of the training situations mentioned here, it is all about the preparation. Without proper desensitization before hand, what I might inadvertently accomplish is to frighten the colts – instead of build their confidence. So my working students and I work hard at preparation.

Once the colts reach the stage where they are perfectly happy wearing the pack saddle at all three gaits, I start placing objects such as metal serving spoons inside the panniers. We go back to working at the walk, trot and canter again until the colts are ready for more objects to be added. I work them up to carrying a variety of metal cookware, all placed loose in the panniers so that it makes a great deal of noise. Then I’ll build a big, fat load of pillows and toss a manty tarp over it, lash it down, and pony them through the orange grove so they become used to the tree branches scraping over the load. I’ve found that following this kind of exposure, I don’t have to be concerned that at some point later in their life they might spook out from under me when a branch hits my hat! 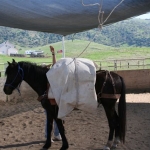 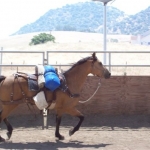 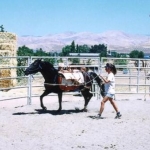 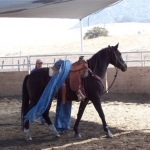 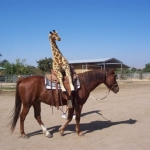 Throughout all these little training vignettes, the colts are also expected to maintain their ground manners, staying soft in the halter both laterally and vertically, and to do all the different ground work exercises they learned as new babies. With the added advantage of the imprinting, things like the rope work on their bodies, the saddling and the pack horse training are usually quite uneventful. But we never forget our roots – “groundwork”. Groundwork, done with precision and feel, is the basic foundation element.