I have been breeding Morgan horses for over 10 years. Although this endeavor started from what could almost be called an accident (after all, I began my love affair with just two Morgan geldings), once I made the decision to breed, a great deal of thought went into how I wanted to proceed once the foals were on the ground. Because of my many years of experience starting colts (of various breeds) for the public, I knew the importance of building a foundation in my Morgan colts from the earliest possible moment. I wanted to build trust, confidence and respect before they grew to 1,000 lbs! 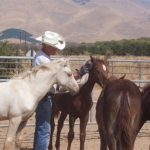 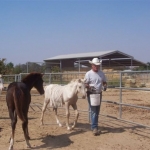 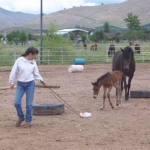 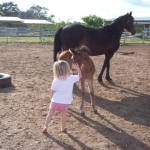 Since 1986 I have been an avid follower of what is frequently called “natural horsemanship” after meeting Buck Brannaman instructing a clinic in my hometown of Ojai, CA – and I have never looked back. His style of training impressed me and made sense … making me forever grateful that I had the opportunity to work with him at clinics throughout California and at his ranch in Wyoming over the years. From Buck, I learned the value of being particular about how my horse responded. His teachings are what got me to where I am now in terms of skills and abilities, and probably saved my life a time or two or three, since I didn’t always get the “cream of the crop” when people brought me their colts to start.

Regarding Morgans, I wanted my colts to be raised in an atmosphere of instruction that followed the parameters set down by Buck and other clinicians who I respected such as Ray Hunt and Bryan Neubert. But none of these gentlemen favored “imprinting” baby foals. After discussing it with them at clinics, I understood why. It seemed to me that the “imprinted” colts these particular clinicians had seen had received perhaps the first stage imprinting only – the touchy/feely stage – but not the follow-on discipline and early learning that is part of Dr. Robert Miller’s Imprint Training.

I struggled with this for several months. I deeply respected the information provided by the clinicians, but couldn’t help wondering if I could develop an approach to imprinting foals that would indeed be beneficial long term. I decided to try, so I implemented a combination of Dr. Miller’s Imprint Training and Early Learning plus the techniques and exercises that Buck does with his horses and teaches all over the world. I have found this imprinting approach invaluable to building a strong foundation in my Morgans. 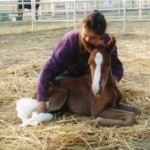 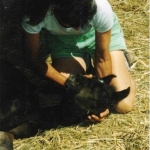 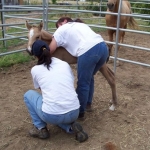 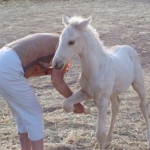 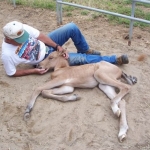 The first foal crop was saddled and ridden for the 1st time in October 2005. I always ride initially once or twice in a rope halter. On the 2nd ride, which in this case was their 1st ride in a snaffle bit, they went out on a trail ride. They were also ridden in, around and over many different obstacles, and into and out of deep barrancas. Not a single buck or spook. They were the easiest, safest, softest colts I had ever started. They had a very strong work ethic, and they had a huge amount of trust in the human as their leader. So this “imprinting stuff” can work, if it’s done right.

True, it was a fair amount of work for 3+ years before these colts were first ridden – compared to leaving them out in a pasture and never touching them for that time period. The imprinting itself is physically demanding for a person of my small size, and it was subsequently repeated several times over the next few days. Then the halter training began. While this takes only a couple of days, and only a few minutes each day, it is a step in my opinion that is absolutely imperative. The halter training is what begins the foal’s educational process of understanding the human as the leader. 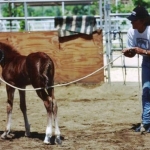 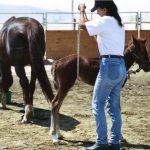 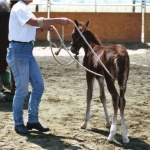 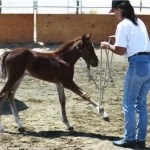 Once I have the foals halter trained, respectful and leading well, I will spend some time “sending” them around and over obstacles. This exercise as well as others, like trailer loading, helps the foals develop the trust and confidence in knowing the human will not let them be hurt. 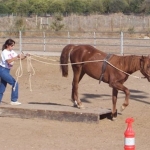 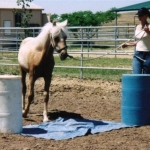 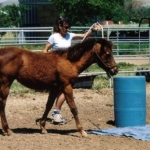 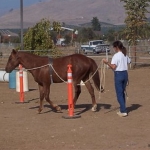 My colts basically never learn how to say “no”. I am very careful to set things up so that they are always successful. I start small and build. Then once I have the foals going well, I pretty much leave them alone for the next several months. All the foals and their dams go out into a pasture together to learn their “equine social skills”. They develop respectful manners with other horses and an understanding of their proper place in the herd. In this sense, I kind of think the other horses are doing some of my work for me.

The only time the foals are handled or worked with during the next few months is when they have their hooves trimmed, get de-wormed, receive their vaccinations, and when they are weaned. At each of these times, I will take the opportunity to brush up on their groundwork before they go back out into a pasture again. I believe in frequently changing “sleeping arrangements” which causes the foals to leave their “group” and allows them to meet new and different bands of horses. Before too long, the colts are happy with any group of horses they are with, and it shows later when I ride them out on the trail with strange horses. They just know how to “get along”. 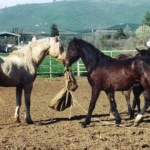 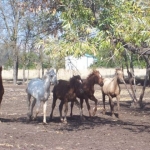 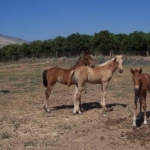 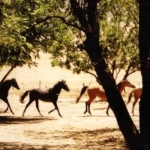 I have often asked myself – is it breeding, is it the imprinting and/or the early learning, or is it the occasional follow-up training? Could I have obtained the same results by changing any part of this equation? Well, I do believe that I could have obtained at least similar results without some or all of this because I know other breeders who have nicely mannered foals that are a credit to their owners, and they do not “imprint”. If a person has the “feel, timing and balance”, or the skills, ability, sensitivity, empathy and understanding for the horse, leadership and most of all the patience, you bet they can have a wonderful colt.

However, for more than 20 years I have started many, many colts for the public. Some of these horses had been imprinted by their owners, but just not with the attention to detail that I believe in so strongly. I can testify that being particular pays off. You’ll just have to come see the colts at JaF Morgans – there IS a difference!